This is a Gatchamania Episode review. Opinions expressed are those of the author.

This episode review is image intensive.

Fish swim peacefully in the water, amongst streams of bubbles and cheerful flute music. Not to mention the many modern structures on the bottom of the ocean. The narrator tells us that the ISO has been very successful at protecting the natural resources of all of the Earth’s oceans. Hmmm… even the ones ravaged by the natural disasters of the V2 Plan?

And I am right to be doubtful. For now we see pollution on the water’s surface, and dead fish rising to the top.

Somehow, this beautiful scene has instantly been turned into one of death! Now we are faced with visions of dead coral and fish skeletons covered in filth on the bottom of the sea. Dead fish wash ashore, and the birds that eat them die as well.

And cut from BOTP:

Interestingly, the flesh seems to be literally dissolving on these birds and fish.

The ocean waters are now brown, and it is clear that everything is dying. And after this scene of gruesomeness, we cut to…. triumphant brass instruments heralding the Fish Parade at the Crescent Base!

Upon hearing the news of the pollution, the ISO immediately begins searching for a cause, and a possible solution.

Dr. Nambu is chosen to lead the investigation. To signify his leadership, he holds up a beaker on a stand. It is his scientific flag.

Okay, I don’t know why he’s holding up the beaker and stand, but it sure looks weird!

“This is liquid cellulose PCB.” Nambu briefs the Science Ninja Team. “However, it contains a new pollutant.”

“Yes. It was intentionally created to ruin the oceans.” Nambu replies.

“Galactor must be behind this!” Jun declares. Boy, she’s learned something these past 54 episodes, hasn’t she?

But apparently Jun has brought up something Nambu hasn’t considered, because he says ‘Hmmm….’ thoughtfully and strokes his chin.

Everyone stares at the pollutant.

“Is there any effective way that this new pollutant could be cleaned up, Doctor?” Jun asks.

“It’d take years to decontaminate.” Nambu answers. “I know that Galactor will stop at nothing to conquer the Earth, but this attempt is more horrible than I’d ever expected!”

Even as Nambu says this, a familiar laugh comes from a communications screen on the wall. Jun is so surprised that her nose disappears! 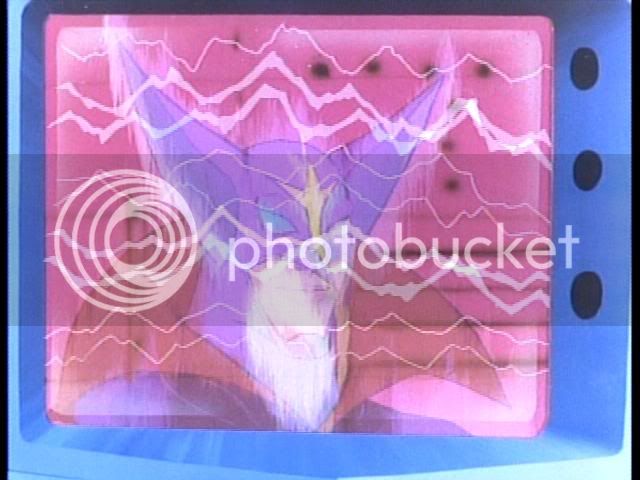 “Dr. Nambu, Gatchaman…” Katse-Claus greets them. “Is this thing on? Let me see if I can make our intentions clear to you!”

Ken tightens his fist in a very Condor-esque manner.

“As scientists, you must realize that 70.8% of the Earth’s surface is water!” Katse says, as everyone stares in disbelief. I guess they didn’t know this scientific fact.

“So far, we’ve only released radioactive cellulose into about, ooh… 0.01%.” Katse goes on. “Just watch, Bird People! If you don’t meet our demands within the next 24 hours, we’ll begin polluting another large body of water, only this time, we’re going to make it 0.1%!”

“I’ll never let you get away with that, you monster!” Ken shouts.

Now I’m confused. Can Katse actually hear him? And if so, does that mean that Katse can see Ken and his civilian identity has been revealed? Oh, the humanity!

But perhaps Katse can’t hear, because he goes on speaking as if Ken never said anything.

“Listen up! Here’s the deal. Doc Nambu, Gatchaman, and the Ninja Kids will all surrender to Galactor!”

I was wondering if this means that Katse has figured out that the Science Ninja Team are ‘kids’, but according to the subs, he just wants the ‘Ninja Team’. I’m guessing this is just Edwin Neal having some fun with the dialogue. He’s certainly doing a good job in this scene! I’m

Clearly the Team isn’t too thrilled with the idea of surrendering.

“I’d like to snap off his ears!” Ryu mutters, but his lips don’t move. Turns out in the subs he doesn’t say anything at all. I guess ADV wanted Ryu to have some input into this discussion.

“Ooh, why the long faces?” Katse asks, making me wonder if he can see them again. Or is he just a good guesser?

“Just think, you’ll be giving your lives to save everyone on Earth, and we’re giving you all the chance!” Katse tells them. “You know, you really should all be grateful!”

“Now don’t forget, you only have 24 hours.” Katse says. “Give us a ring on Frequency 007AR21 any old time and I promise I’ll pick up. Adieu, Science Ninja Team! Call me!”

And I am still

at the voice acting here! I am actually expecting Katse to put out his pinky and thumb and do the ‘call me’ hand motion!

Ken’s clenching his other fist now.

Everyone is standing in stunned silence.

“I’m afraid we have no choice if our lives will save the Earth.” Nambu says, a bead of sweat falling down his face.

“No, Dr. Nambu, we just can’t!” Jun exclaims. “If we surrender to Galactor, then they’ll finally be able to conquer the Earth!”

Jun makes a good point here. If they surrender, they’ll save oceans from being contaminated (presuming Galactor doesn’t go back on its dubious word) but the world will be lost anyway under Galactor’s rule.

“You know, she’s right!” Ken agrees with me. “You’ve got to give us the orders to move out, Doctor! Please, Sir!”

Everyone waits anxiously for Nambu’s decision.

“This is going to be very difficult, Ken.” Nambu says.

“Maybe so, but I won’t let Katse get away with this!” Ken vows. “Now let’s go launch the God Phoenix!”

“Big ten, Ken!” says everyone else in unison

And yes, that’s an ADV tribute to BOTP. The subtitle says ‘Roger!’.

Insert stock footage of the God Phoenix leaving the Crescent Base, to the sound of victorious trumpets.

So where are they going in the God Phoenix? Well, they’re now surveying the oceans. Which one? Well, let’s pick any old ocean. The Earth is only 70.8% covered in water, you know.

“Jun, go ahead and tune in to Frequency 007AR21, and make the call to Berg Katse.” Ken orders. Whenever anyone says ‘007’ in this episode, I’m thinking of James Bond. But this isn’t the James Bond episode. That’s coming up later…

“Ken!” shouts Jun in distress, but Gatchaman remains firm in his decision.

“I get it!” Joe smiles, snapping his fingers. “You plan on surrendering, and then taking Katse by surprise, right?”

“I get the picture!” Ryu grins. “So then we’re only going to pretend to surrender to Katse!” 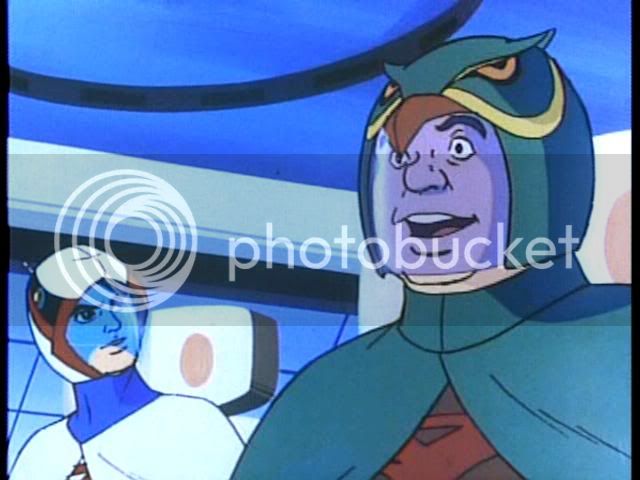 Ken neither confirms nor denies their suspicions, but simply tells Jun to ‘hurry up and make that call’.

So the Science Ninja Team calls, and Katse-Claus appears on a communications monitor. Jinpei is appropriately horrified.

Ken holds up a CB mic and speaks into it. Gotta love this high tech stuff!

“Bravo, Gatchaman!” Katse is practically purring. More kudos to Edwin Neal here.
~ Table of Contents ~ Next
[Report This]
You must login (register) to review.